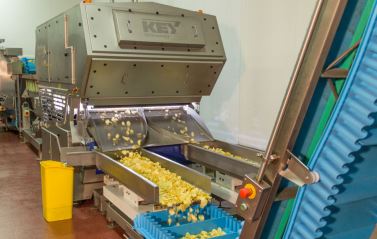 Tayto is the largest British-owned manufacturer of potato chips/crisps and the top selling brand of chips in Northern Ireland Their mission is to make superior products by using superior technology. In 2014, they turned to Key Technology and installed four new Optyx® digital sorters to better control the removal of defects and foreign material (FM) and produce the highest quality batch-fried and continuous-fried potato chips.

“We considered sorters from two suppliers. We compared the technologies’ ability to sort at our speeds and find clumps and discoloration. The suppliers’ reputations for sorting handfried crisps as well as continuous-fried crisps played into our decision too. Key was far more field-proven with these applications,” said Philip Hoden, Group Head of Engineers at Tayto. “We use the highest performing technology so only the best products reach our customers. Key’s Optyx is the superior solution.”

While most potato chip manufacturers use camera-only sorters, Tayto rose above the industry standard and selected combination camera/laser sorters to better identify and remove the widest variety of defects and FM. The cameras recognize color, size, and shape to find defects such as green spots, bruises, and overcooked black spots. With the help of intelligent software and algorithms that Key developed specifically for this application, the sorters’ lasers detect common batch-fried defects such as doubles and clumps of chips stuck together and oilsoaked and blistered chips in addition to FM.

Another unusual aspect of sorting on the batch-fry lines at Tayto is their use of Key’s split-sorter configuration, which takes the 48-inch (1200-mm) wide scan area of the Optyx 6000 series sorter and splits it into two 24-inch (600-mm) wide lanes. This enables Tayto to sort two different products simultaneously on each sorter, with software that allows them to define different defects and different reject thresholds on each sort lane.

“The split sorters give us a lot of production flexibility. We can run crinkle crisps on one side and flat crisps or lowfat crisps on the other side at the same time,” said Paul McDonald, Project Engineer at Tayto. “This versatility allows us to allocate the eight batch-fryers that feed each sorter to two different products to satisfy production demands.”

In addition to maximizing product quality, the consistent reliability of Optyx enabled Tayto to reduce labor. This savings is greatest on their continuous-fry lines where up to 5000 lbs. (2.2 metric tons) of potato chips are sorted per hour. “Prior to installing Optyx on our high speed lines, we had three or four people manually inspecting product after the sorter. Now, thanks to Optyx, we only need one operator on the line to provide extra security,” said Hoden. “We’ve been able to redirect two or three people from each line to work elsewhere in the plant.”

Tayto operates most of their production lines 24 hours a day, six days a week, with the seventh day spent cleaning. “Optyx is well designed for sanitation,” said Hoden. “It takes one person a couple of minutes to remove the belt, which is then washed. The rest of the machine is wiped down. It’s all very easy.”

“We had Key come in during installation to train our Super Users, who can then train others. We’ve also used Key’s online training program, which is very, very good,” noted Hoden. With modules designed for operators, maintenance personnel, sanitation crews, supervisors, and others, Key’s self-paced, interactive multimedia curriculum helps Tayto’s employees operate Optyx at peak performance while minimizing training costs. It’s part of Key’s standard PROliance™ service package that also includes RemoteMD™, a real-time analysis tool that also helps maximize the sorter’s performance. “Optyx is very reliable, so it requires minimal attention, but it gives us added confidence knowing that Key can log on with RemoteMD and provide support remotely, including making adjustments to the sorters,” noted McDonald. “Key understands that our product is quality. They supplied us with sorters that are doing a great job, and whenever we need anything, they react very quickly and give us great support.”

“We have several measures of success with respect to our product quality and sorting in particular. As part of our in-house inspection, our technical team randomly pulls out product at the end of the line and analyzes color and clumping and other criteria,” said McDonald. “Based on those technical inspections, our in-house team says they’ve seen a marked improvement in the quality of our product since we installed these new sorters from Key.”

“The ultimate measure of success is customer feedback,” concluded Hoden. “Our customers tell us that we make the best potato crisps in the U.K. This doesn’t surprise us – we know that we are using the most advanced technology and we’ve optimized the layout to maximize efficiencies. We’re at the top end of our market in terms of quality. Optyx helps in that effort. With Optyx, we can easily control our quality and keep it at that high level.”

**This case study was originally published on Key.net